Where does the time go?  I have been back from The Elly Sienkiewicz Applique Academy for almost a week, and I am still overwhelmed.  It is so hard to get back to my normal routine!  I am happy to report that hand-applique is definitely alive and well.  I am actually going to go out on a limb and say that hand-applique must be on the upswing, judging by the amount of first time attendees at the Academy.

The first class I took was with Rita Verroca.  Not only is she super-talented and willing to share everything she knows, she is the one of the nicest people you will ever meet.  Check out those cowboy boots! 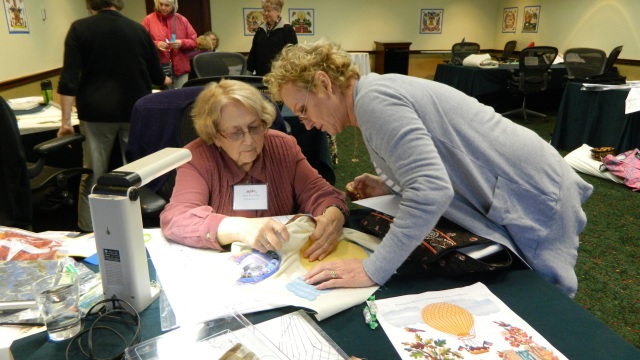 This is a quilt designed by Rita.  It is called Album of Roses.  As you can see, Rita has a unique style of choosing fabrics that make her quilts stunning and one-of-a-kind!  Yes…it is hand-quilted!! 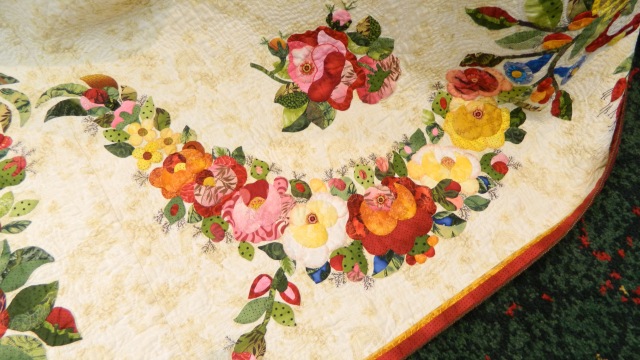 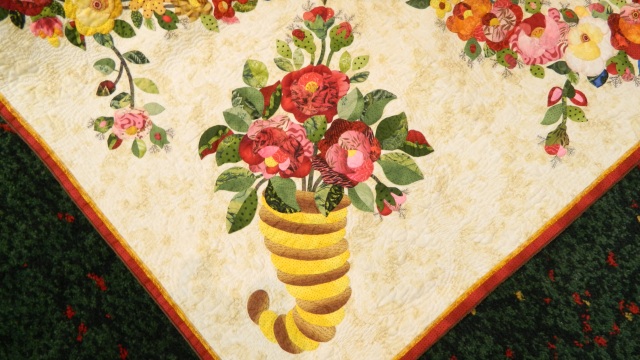 This is a picture of the quilt block we were working on in class.  It is part of an ongoing series of blocks Rita is designing depicting early American history.

This is what I have accomplished, so far.

There are some really teeny, tiny pieces in this block!

It’s the day before I fly to Williamsburg to attend The Elly Sienkiewicz Applique Academy and I should be packed by now, but I am not.  I am too busy working out the rest of the border on Circle of Tulips and I want to get it figured out before I go….so I can relax!

So, in my last post I figured out how to center the swags and how to fill in the space between the swags.

My next step was to decide how curvy I wanted the scalloped edge to be. (Not terribly curvy, I thought, because I have to bind the curve.) So this is what I did…

I took a piece of upholstery vinyl and placed it on the already marked swag.  Next, I marked some placement lines with a Sharpie marker.  The vinyl is clear, but it really is there! 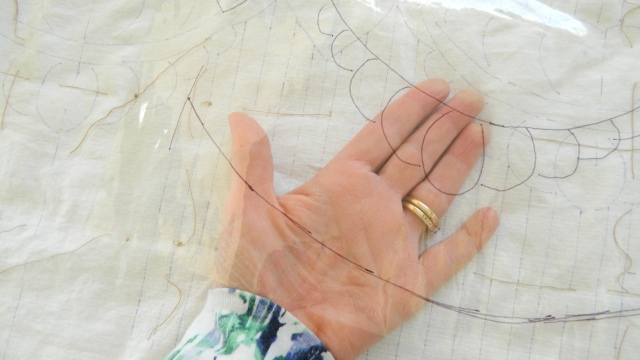 Next, I drew a curved line 3 1/2″ away from the bottom edge of the swag.  Then I cut the upholstery vinyl on the curve, making sure that the Sharpie line was on the template, so I could see it.

Now I can line up the template and draw a consistent curve…..with a water soluble marker…not a Sharpie!! 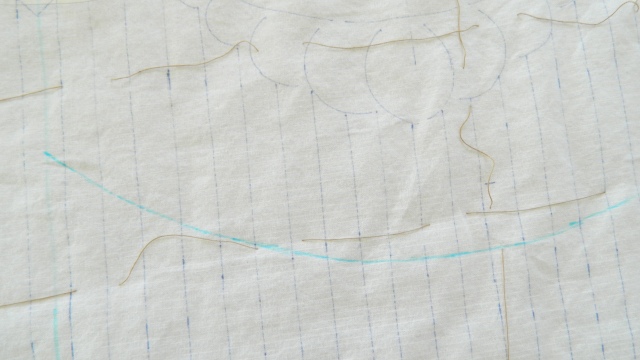 My plan is to stop stitching at the drawn line, so that when I cut the excess fabric and batting off  I am not cutting through the stitching. 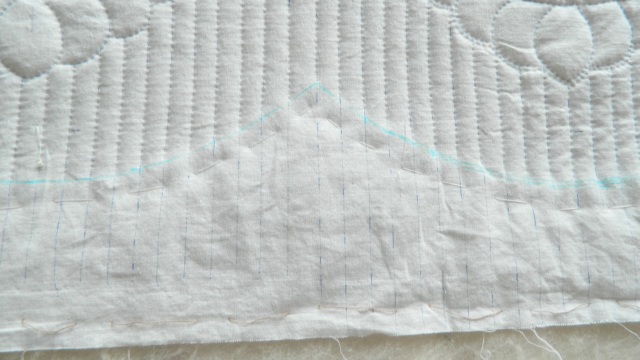 Splendid!!  Now I really must go and pack!! 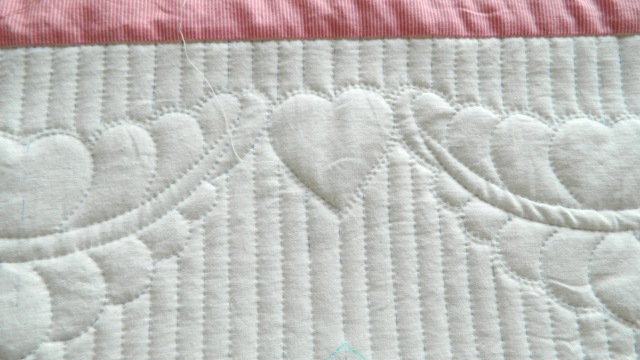 Finally!   Owen’s quilt top  finished.  Notice the stars in the border actually look like stars?  Yipee!  These 16 blocks came from last year’s Barbara Brackman’s block-of-the-week, Grandmother’s Choice.  I actually made 3 blocks every week, so let’s do the math…3 blocks for 52 weeks is 156 blocks…that’s a lot of blocks!  I see a few more quilts on the horizon made from the remaining blocks. 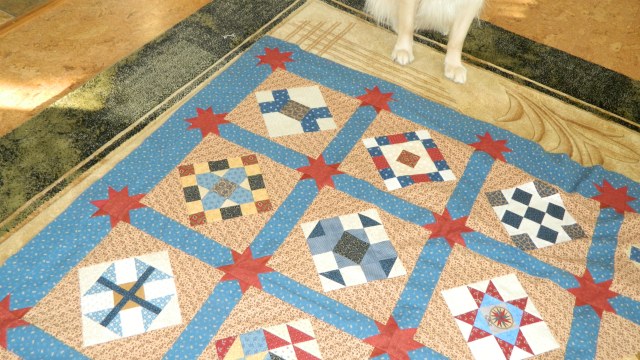 I am busy getting the backing ready for Owen’s quilt so I can take it to Colleen at Elite Quilting before I leave on Sunday for TESAA.  3 more sleeps!!  I have appliqued something special on the back, but you will have to wait patiently until the quilt is back from Colleen’s to see it.  Just a hint…

As I was standing in line at the grocery store, I finally figured out how to tackle the border on my Circle of Tulips quilt.  (I should mention that I am always thinking about quilting.  Every waking moment.)  I purchased a stencil a while back and wanted to use it on the borders. 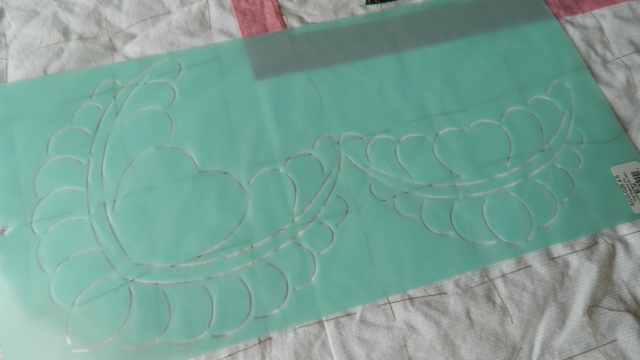 My only problem was that the stencil did not fit the length of the border evenly and I didn’t want to fudge it, like I fudged the border of  “Bouquet for a New Day”.  You can see that here.  So I had a bit of problem solving to do.  First, I thought about how I wanted the finished border to look like.  I wanted the swags to fit directly under each wreath of tulips, so I drew a line that extended from the seam into the border.  That gave me a visual idea of the space I had to work with.  I am using a Clover water soluble marker, so these marks will wash out!

Next, I centred the swag between the lines.  As you can see, I have some space to fill.  Hmmmm…

The heart in the stencil seemed to suit the space.  It was a tiny bit narrow, so I made a template to round out the design.  So far, so good! 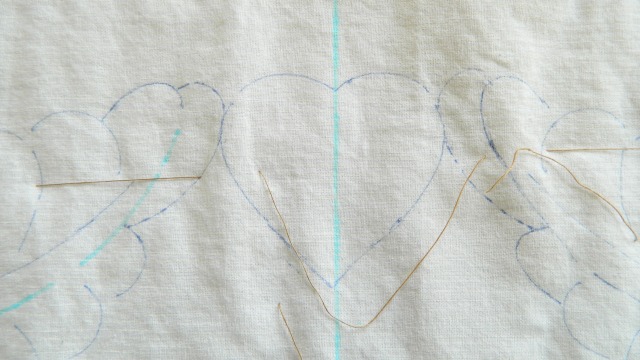 Next, I decided that I would like some quilted lines to fill the space above and below the swags.  Since I am a sucker  for punishment, I spaced them 1/2″ apart.  I must admit, it looks smashing!

So, before I mark the whole entire border, I am quilting a small section just to see if I like it.  What’s not to like?? 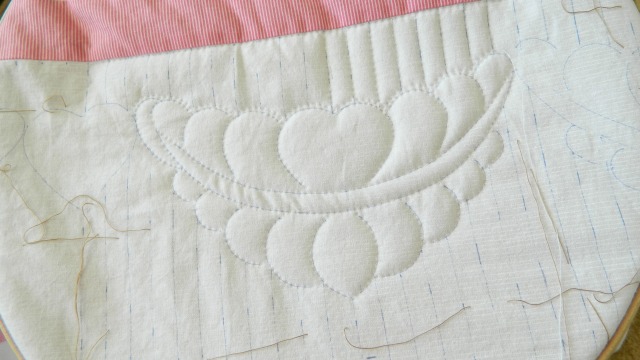 Here is the first block of Barbara Brackman’s new block-of-the-month, Threads of Memory.  I am using a line of fabrics designed by Jo Morton called Amelia.  Lovely!

Whenever I mention that I wash my finished applique blocks, I get emails with lots of really good questions.  So I decided to do a video showing the entire process.  You can see it here. Once you watch the video, the title of this post will make sense.  Trust me.

If you haven’t seen my website, check it out.  All of the tools and notions I use are available on my website.  I also offer a free pattern called “Peggy’s Puzzle”.  It is a 4-block wallhanging (or tabletopper), complete with a dainty border and was designed as a “skillbuilder” exclusively for Simple Bird Studio by MT Designs.  We have just uploaded the third block.  There are also accompanying how-to videos.

I have been hand-quilting every night on Circle of Tulips (also a free pattern on my website!).  One or two more evening and I will have all of the blocks completed and ready to move onto the borders.

Yesterday, I went shopping for the backing for Owen’s quilt.  I had a few ideas of what I was looking for…something boyish, but not baby-ish, something masculine, but not too manly…oh….and it had to be in the same colour-family as the front of the quilt.  Well!  Look what I found!!  Is it wrong to fall in love with a fabric at first sight?  Well…I did! 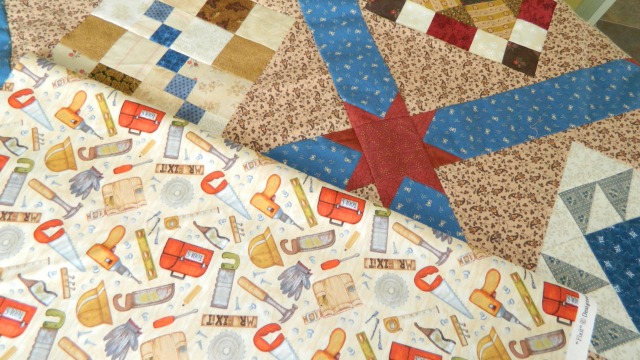 Like many quilters, I am trying to bust my stash.  And, as you can see, I used 3 different reds in the stars, which used up every bit of that lovely (but hard to match) brick red that I own.  So when I was shopping for the backing, I chose a few reds that I thought would match the yet-to-be-completed stars for the border.  This one is the winner!   Long story short, I added more brick red to my stash than I used in the quilt.  So much for stash busting!

It snowed all day.  Literally, all day.  Which meant I wasn’t going anywhere, except to my sewing room.  I decided to put a pot of chili on and play “catch-up” on a few on-going quilt projects.  First, I started making the sashing for Owen’s quilt.  By stitching 4 simple half-square triangles to the corners of each sashing and adding some cornerstones… 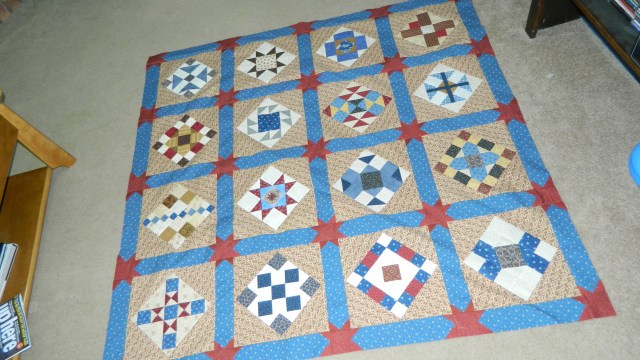 I must confess, I did not calculate for the half-square triangles for the red stars to continue out into the border.  Oops.  I’ll figure that out tomorrow.

So, I put Owen’s quilt away and dug out Annabelle.  I finished stitching the leaves and the hexies, so, it was time for a bubble bath (for Annabelle, not for me!)

While Annabelle was soaking, I decided to go through my fabrics to find a suitable fabric for the 4″ border. To keep myself organized, I am keeping all of the fabrics for Annabelle in a plastic tote (complete with lid) to keep Bruin out.  That plan will only work if I remember to place the lid on the tote!

Anyway, I auditioned a few fabrics, but nothing caught my eye.  That is, until I saw the fabric I used for the vase.  Hmmmm…

I thought that the stripes  would make a nifty border.  And the best part?  They were exactly the right size…4 1/2″ wide!  I think the Quilt Gods are trying to tell me something.  Maybe I should listen! 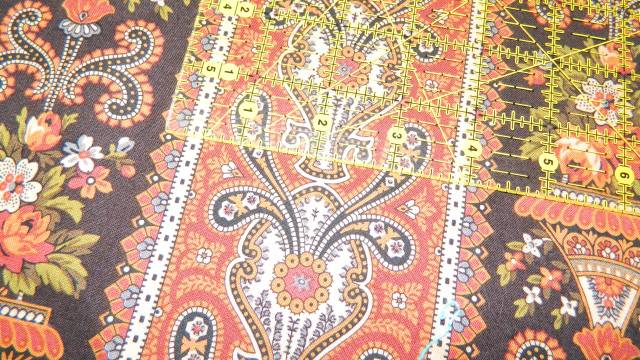 After I did some serious measuring, I realized I only had 3 stripes long enough  for the borders (28 1/2″).  The fourth stripe was too short….but that wasn’t going to stop me!

I had a few smaller chunks of the stripe left over, so I thought I would try piecing it.  First, I ironed the edge over on the left over piece, about 1/2″ or so.

Next, I placed it on the section that was too short and lined it up as best I could.

I carefully folded it over, (so now the two border pieces are right sides together)  pinned it in place, held my breath and stitched on the folded line. 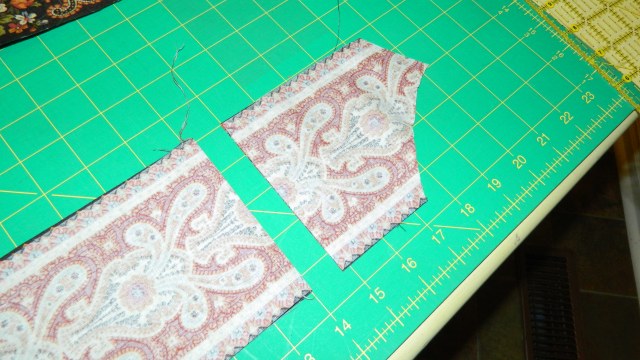 Once that drama was over, I stitched all four borders on and added some cornerstones!  Dandy!

The Hummingbird in Flight Pattern

I am a quilter who is passionate about Hand-Applique. If I inspire just one person, my job will be done!! I am thrilled to share my quilts with a (hopefully!) appreciative audience.....my family just rolls their eyes! I live in Barrie, Ontario, Canada.