I hope that everyone who is participating in this new BOM has received their packages, complete with fabric and pattern.  I thoroughly enjoyed making this block and I hope you do too.  I prepped this entire block before I did any stitching on it. My husband was scheduled for surgery last week, and I knew I was going to need something to do while I waited.  Imagine….3 hours of (almost) un-interrupted stitching time!! 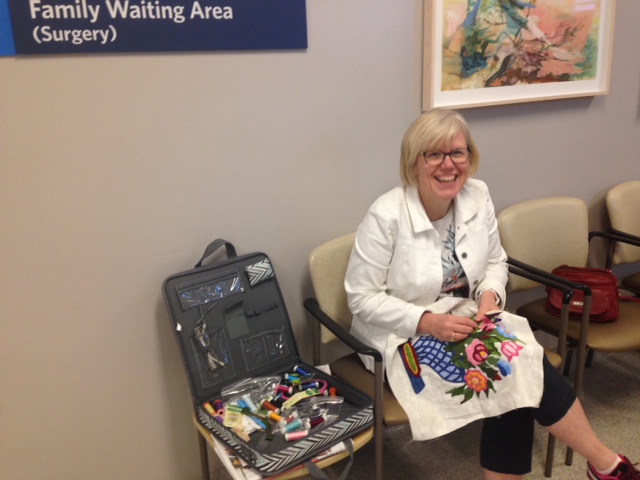 OK…this block has a few two-tone leaves, which I love.  It gives the leaf a bit of dimension.  These leaves are not difficult to do, so do not let them intimidate you.  Be strong! In fact, you can make any leaf a two-tone leaf…just draw a line down the middle of it!

So, you cut the freezer paper template apart and prep them as you normally would…except that you leave one of the edges a raw edge.  It doesn’t matter which one is a raw edge and which one is turned under.

The part of the leaf that has the raw edge gets glued to the background first.

Then the piece with the edge turned under goes on top!

As you can see, the tip of the half leaf with the raw edge sticks out from under the top half leaf.  This can be tucked under while stitching. 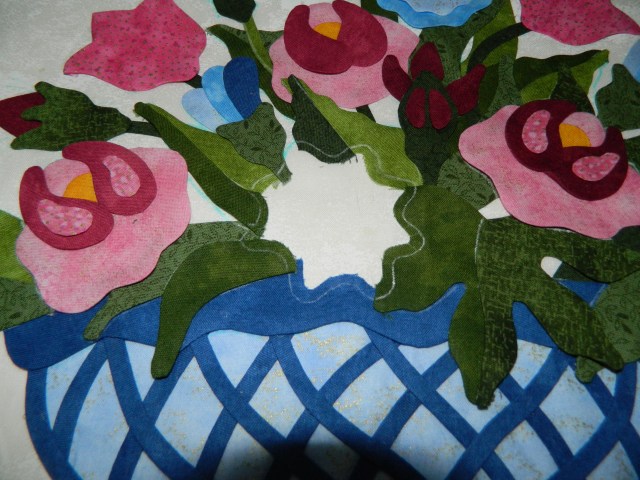 For this next leaf, you may notice that there is not a lot of contrast between the two fabrics.  I mean if you are going to put the effort into a two-tone leaf, you want everyone to see the fruits of your labour!  In that case, simply switch one of the fabrics out.  There is enough fabric in your kit that you can do this.

Remove the offending piece of fabric!

For the smaller two-tone leaves, I made sure there was enough contrast.  For the large leaf in the centre of the block, I wanted it to be a little more subtle, so I used the fabrics that the pattern calls for.  It is your quilt and you know what you like!

Let’s talk about stems.  For most of the stems, I used a Clover 1/4″ bias maker.  For the skinnier stems, I cut myself a piece of freezer paper the width of the stem (less than a quarter inch but bigger than an eighth). Then I simply prep the skinny stem as usual.  When I use the 1/4″  bias maker, I always make sure I am using a strip of fabric that has been cut on the bias.  For these skinny stems, I use the straight grain.  Don’t worry about how much bias to cut. I always cut a little extra.  If you don’t use it all in this block, you will use it in another block.

When it comes to stems, you also want contrast, just like in your leaves.  So I changed the fabric for some of the stems, just so that they would stand out and not blend into the leaves underneath it. 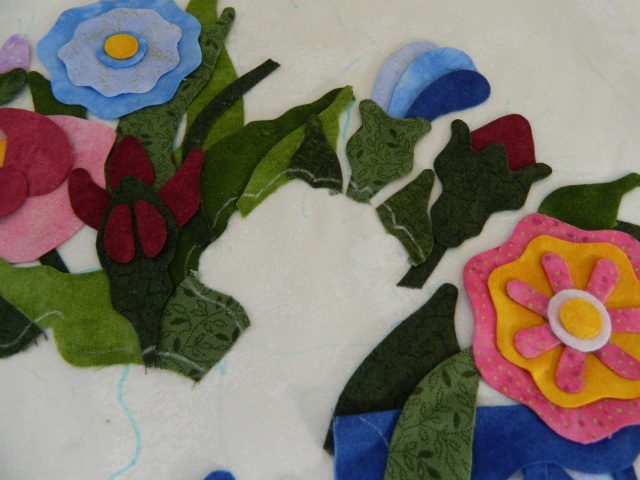 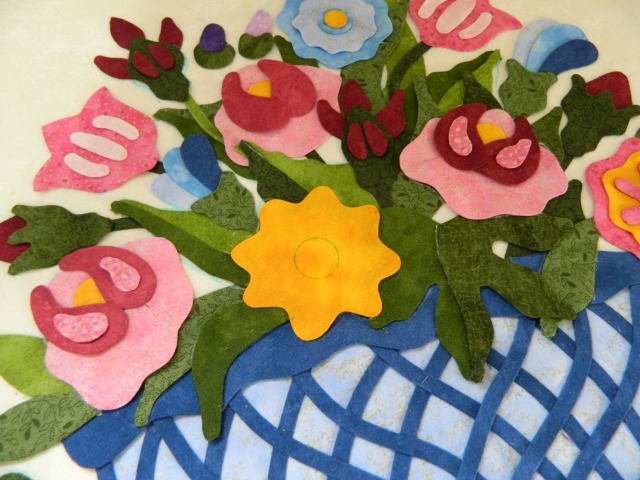 Once all the stitching was done, I did the little bit of embroidery, which I think adds so much to this block.  For the hairs around the rose buds, I used one strand of embroidery floss.  For the stems coming out of the purple flowers, I used two strands.

So, once the block was absolutely finished (yippee!) I tossed it into a sink of hot, soapy water.  By doing this, it removes the blue marker, glue, and of course, cat hair! 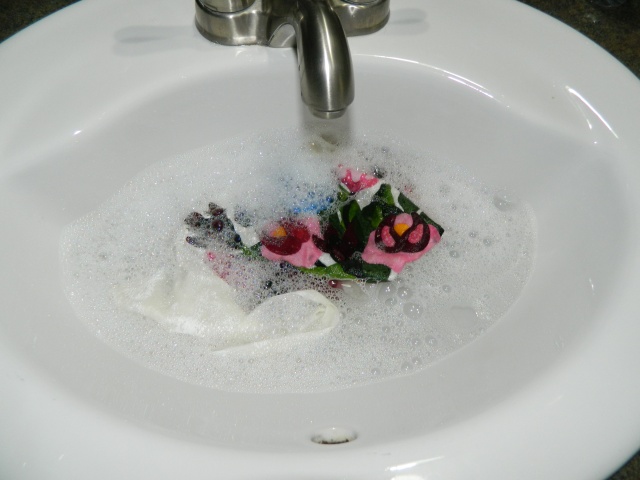 I usually let the block soak for half an hour or so.  Then I rinse the soap out and then gently squeeze the water out.  Next I lay the block on a towel to dry.  How lovely!!

When I was making my Civil War Bride quilt a couple of years ago, I never dreamed my granddaughter Grace and I would spend so much time playing “I Spy”!!  I Spy an elephant, a dog, a cat and an ostrich!  Life is good!! 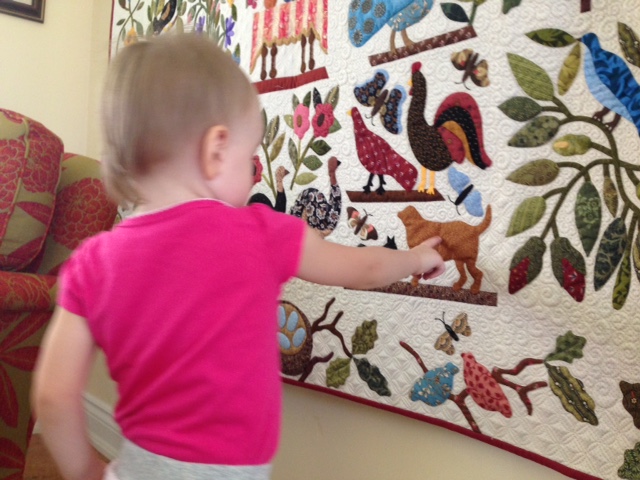 Seriously!  I had huge quilting plans for August.  Huge plans.  But sometimes life gets in the way, which is why the first block of the new BOM is not quite ready to ship out.  My sincerest apologies:)  Next week I will have it all together (I hope!) and I’ll be shipping the blocks out.  I hope you are as excited as I am!  Also, because the summer did fly by and we were all busy doing summer stuff, I am extending the deadline for the sign-up for the new BOM.  I’ll take sign-ups until the middle of September.  You can sign up here in my website:)

Before I show you what I have accomplished for the first block, I want to urge everyone to check out the Academy of Applique website.  Registration starts Labor Day, September 5th…check your calendar because that is really soon!!  Did you know that 95% of students sign up on that day!!  And many classes fill that same day.  So check out the website and see if there is a class (or two!) that might excite you.  Here are a few sneak peaks of what I am teaching.  I’ll be teaching two separate classes.  To say I am excited to be teaching at the Academy is a major understatement!! 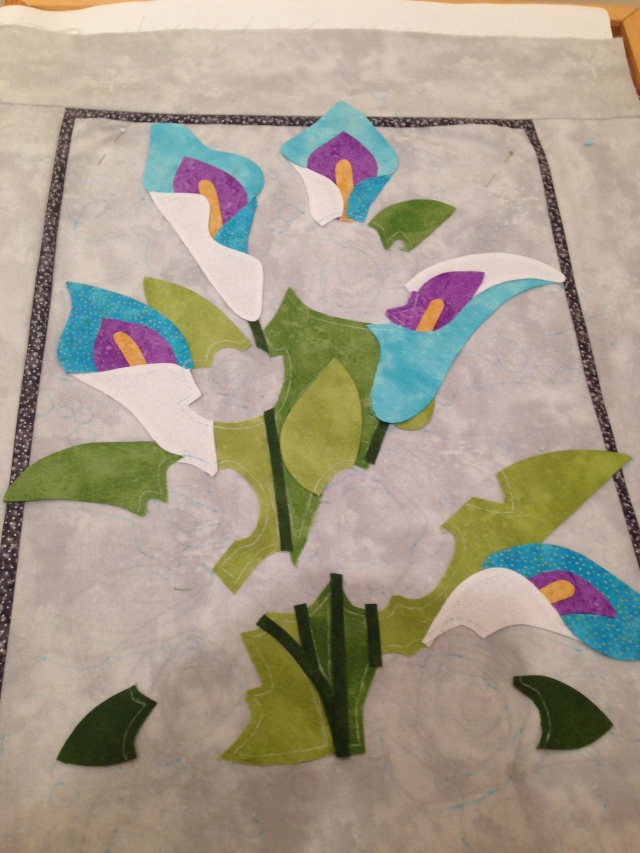 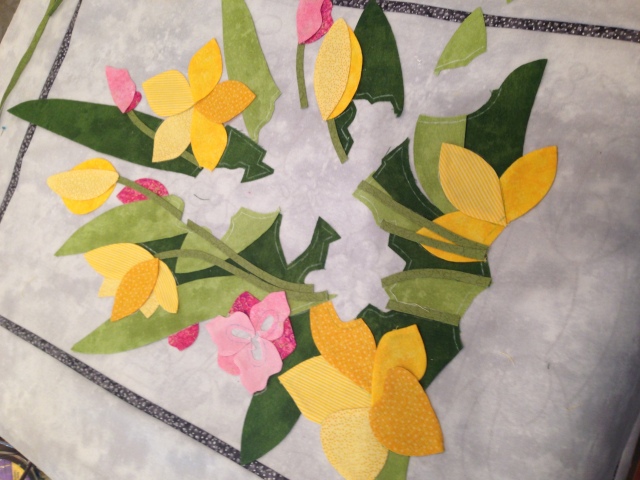 I am also making very good progress on the borders of Bed of Roses.  I stitched the pink scallops in place.

And then I added the green circles.  In order to make sure the circles were centred, I used the same plastic template and cut a hole in it exactly where the green circle would go.  Easy Peasy!

Okay, so here is more of the first block. First, I wanted to finish the base of the woven basket.  I traced the “table” template and prepped the piece.  I am now in the habit of tracing the seam allowance on almost every piece I prep.  It is such am easy way to guarantee that things line up properly. 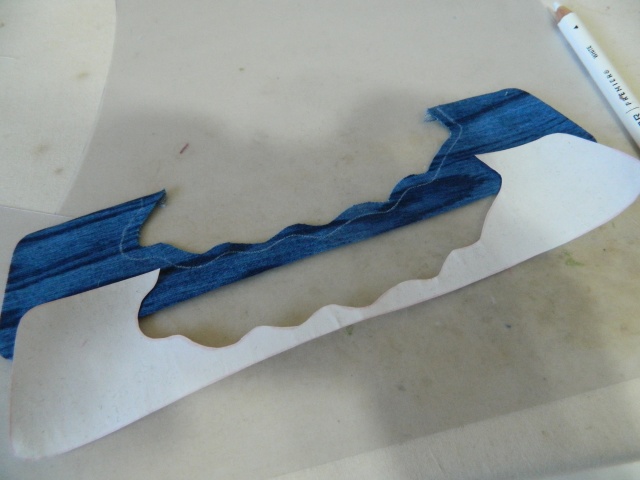 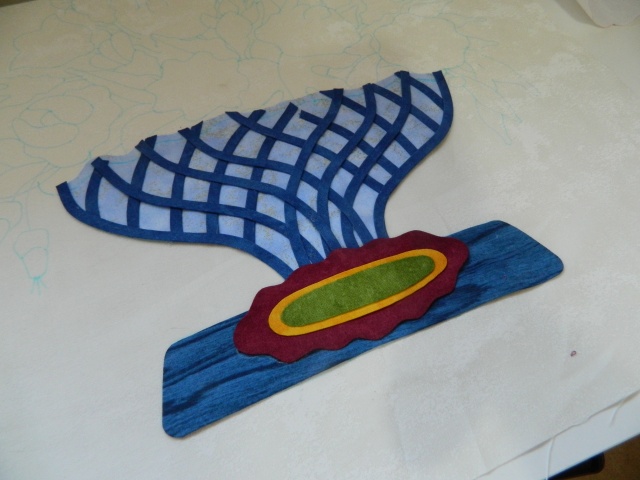 Ok so now I started prepping the leaves that are on the outer edge of the design.  Do you see the beauty of having that seam allowance drawn on all the pieces?  Magical!!

And I started to add the top of the basket and some more leaves.

I couldn’t wait to start adding some flowers!

Before I forget, these are the fabrics you will receive in your kit.  I have also made a Colour Chart to show you where each fabric goes.  Handy!

So this is what I have done so far!!

The Hummingbird in Flight Pattern 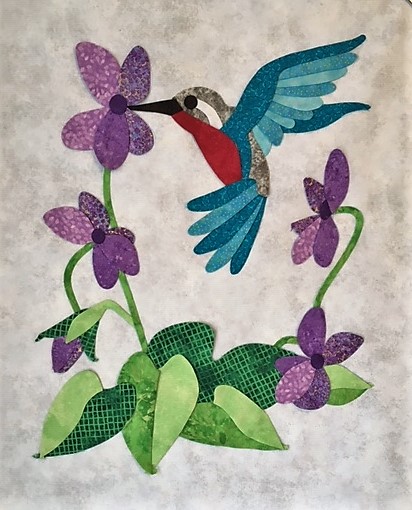 I am a quilter who is passionate about Hand-Applique. If I inspire just one person, my job will be done!! I am thrilled to share my quilts with a (hopefully!) appreciative audience.....my family just rolls their eyes! I live in Barrie, Ontario, Canada.